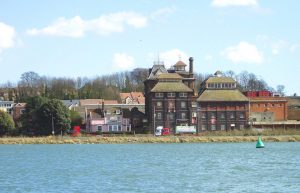 Cliff Quay Brewery in the late 20th Century Over the last 60 years the brewery that ran nearly every pub in Ipswich was Tolly Cobbold, conveniently locating a brewery on the banks of the River Orwell at Cliff Quay. The current brewery building … END_OF_DOCUMENT_TOKEN_TO_BE_REPLACED

Ransomes Quay c.1890 Have you ever wondered about where Coprolite Street on the Waterfront gets its name from? Well one of our volunteers took it on themselves to look into the story behind this odd street name. Today the fertilizer industry … END_OF_DOCUMENT_TOKEN_TO_BE_REPLACED